This line has day and night itinerary.
On which itinerary do you want to search?

Public inter-city transport services by road are the responsibility of the Regional Government of Gipuzkoa, and they are managed through concessionary companies that won the tender for the different services.

The challenge and the commitment in Lurraldebus' everyday work is to offer quality, effective and efficient public inter-city transport, that meets the everyday mobility needs of citizens using Lurraldebus to go to work, educational centres, university campuses, hospital centres and cultural and sport events in the different regions in the territory and in the capital of Gipuzkoa, Donostia/San Sebastian. Moreover, Lurraldebus' services connects municipalities, regions and the capital with Bilbao and Vitoria-Gasteiz.

Lurraldebus believes in sustainable mobility from a social, territorial, economic and environmental perspective, driving the use of public transport over private vehicles as a contribution to the fight against climate change. In this regard, in collaboration with the Regional Government of Gipuzkoa, progress is being made on policies in favour of electric mobility and renewal of the bus fleet with hybrid vehicles, as well as measures to control and reduce greenhouse gas emissions.

Additionally, Lurraldebus' public inter-city transport service seeks to boost universal accessibility and mobility for everyone, and has implemented pioneer actions such as the audio notice service to announce stops while running each line's route.

What our service offers 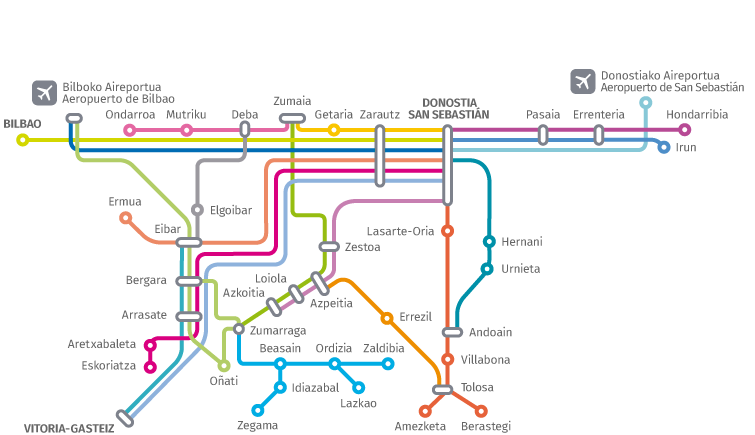 Regular services are offered both during the daytime and the night-time schedule. Night-time services are identified with a "G" on the name of the line and their rate is different from the daytime; progressive discounts from the Lurraldebus/Mugi card cannot be used, although it can be used to pay.

Lurraldebus also offers special services for cultural and sport events, saint festivities, cider season and holiday events held throughout the year all over Gipuzkoa's territory, helping to guarantee citizen mobility and the use of public transport.

Given the territory's orography and in municipalities and regions with scattered populations, Lurraldebus provides an on-demand public transport service to residents. Interested parties can use this service by calling the Lurraldebus service telephone number beforehand, based on the established schedules, to request the transport and make the arranged trip.

In the year 2005, the Regional Government of Gipuzkoa and concessionary companies of public transport for travellers in Gipuzkoa founded the company LURRALDEBUS, S.L. in order to coordinate and improve provision of public inter-city transport services by road for travellers and offer them under a shared image.

Two years later, in 2007, huge progress was made by creating the Lurraldebus card, implementing the Single Ticket for the entire inter-city bus service, which led to a huge technological leap with vending and validation machines, making it possible to use the new Lurraldebus transport card.

Under the policy developed by the Regional Government to foment and boost public transport for travellers in Gipuzkoa, and with the involvement of different public institutions responsible for transport issues, in 2011 the Territorial Transport Authority of Gipuzkoa - Gipuzkoako Garraioaren Lurralde Agintaritza, S.A. (ATTG) was created, formed by the Basque Government, the Regional Government of Gipuzkoa and the Town Halls of Donostia/San Sebastian, Irun, Eibar, Arrasate, Errenteria, Zarautz, Hernani, Lasarte-Oria and Oiartzun.

The purpose of the ATTG is to coordinate and boost all public transports in the territory of Gipuzkoa, and one of its most significant achievements was implementing the unified, progressive rate system with the Mugi card, which allows users to travel in any transport mode in Gipuzkoa with just one transport card, paying the same rate, and enjoying progressive discounts.

After the unified Mugi system came in force, in the year 2013, Lurraldebus was no longer a commercial entity, and was absorbed by the Regional Mobility Department. At this time, it became the public inter-city bus transport service of Gipuzkoa, and it began to grow with new lines and services.

Two years later, in 2015, the new concessions were started up in the regions of Tolosaldea, Urola Erdia, Urola Kosta, Debabarrena, Debagoiena and Goierri, reaching all the territory, as well as long-distance services and services to connect to Basque capitals and the Bilbao airport.

In 2016, the Lurraldebus Management and Control Centre was reinforced, and Customer Service and Information was inaugurated, a comprehensive, unified service offered through the free telephone number (900 300 340), in operation every day of the year, and an email address (lurraldebus@lurraldebus.eus), open for suggestions and complaints from public transport users.

Lurraldebus currently has a total of 118 lines. Of these lines, 77 are regular daytime lines, 19 are regular night-time lines, 16 are on-demand lines and 6 are special lines.

The Regional Government of Gipuzkoa is still working in different fields for ongoing improvement of public transport, placing special emphasis on developing technological applications, free WiFi in the buses, a new corporate website, real-time information at the stops, a news service on the TV screens in the buses and an audio service to notify stops to facilitate more and better information for Lurraldebus users.

Moreover, the free Lurraldebus mobile app for Android and iOS was created, to access information in real time on all of Lurraldebus' services, with arrival times for each one of the stops in the network with Lurraldebus' services. The application is available in four languages: Basque, Spanish, English and French.

To view developments in the services offered by Lurraldebus, please see the reports that are periodically drawn up.